This was my second play-test of Richard Lee’s solo DBA variant rules (see the discussion group on Solo DBA development). It involved pitting my Picts against the NPG’s (Non Player General’s) Romano-British army. The Brits defended and this is the battlefield/terrain selection that the NPG chose, using Richard’s selection mechanisms, with a gentle hill, a road and a wood set out:

I varied the positioning rules for the Brit camp as, with my three Psiloi against their one, it wouldn’t have made sense to place it near the wood (marked here by a patch of green felt – minimalism rules!). The camp was garrisoned by the odd unit of Brit spears. I then followed Richard’s deployment rules and this resulted in a mass of Brit spears in the centre backed up by a unit of psiloi in reserve, with the cavalry and light horse on the centre right and far right of the line.

I staffed my camp with a motley rabble of camp followers, and set up a column of psiloi on the right of my line to move into the wood on the left of the Brit position. My spears were positioned in the centre and centre left of my line, with my light horse on the left flank and my cavalry general behind the right end of the spear line:

This is another picture of the Brit lines:

In the first move I ordered my psiloi into the wood in column, which the NPG (who was designated as having a ‘neutral’ temperament) countered with his own psiloi while cautiously moving his spears and horse forward. My own spears and light horse also advanced:

I pulled my light horse back as they were outmatched by the NPG’s mounted. The NPG used the next move to repair and lengthen his line, and reinforce his psiloi near the woods with a unit of spears:

I attacked the British left with my psiloi but was repulsed, as the two lines of spearmen crunched into combat in the centre: 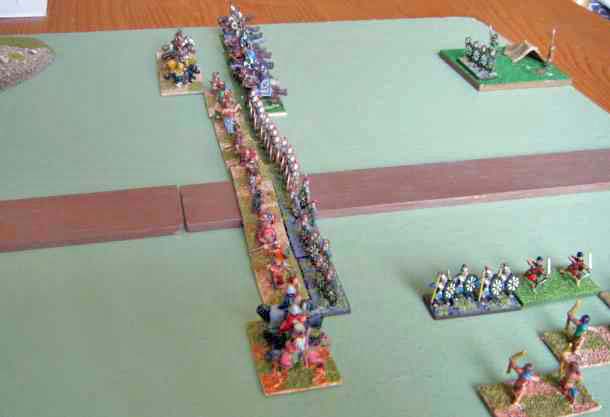 The clash in the centre went badly for me – I lost one spear element, then a second as the NPG repaired his line by moving a recoiled unit back into contact (a liberal but I think fair interpretation of  the ‘repair line’ option). I flanked the end of the British line with my cavalry general:

The left-most Brit spear element was duly dispatched, which meant it was now 2 – 1 to the NPG. The next throw produced a defensive option for the NPG, but I diced to override this (as per Richard’s rules – this can be done a limited number of times each game on a favourable dice throw) to allow the NPG an aggressive move with his mounted troops. There was now fighting all along the left of my line, with my light horse flanked by the enemy’s light horse and confronted with a hostile cavalry unit. My left-most light horse element was killed…the NPG was now 3 – 1 up and clearly in the ascendant:

Back on my right wing I used my cavalry general to flank another spear unit which was summarily dispatched – it was now 3 -2 to the NPG. However, back on the left wing and the left centre the NPG came over all aggressive and moved to flank my left-most spear unit. My poor Picts crumbled, and it was game over, despite the fact that my light horse took out the Brit light horse in a final gesture of defiance.

So an enjoyable and fast game ended with a 4 – 3 win for the NPG: 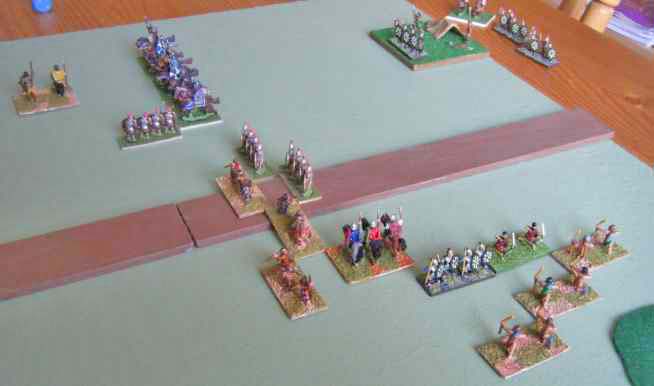 Richard’s solo rules worked well with some minor tweaking, and provided me with a useful NPG opponent. Great fun!

I played this game primarily as a try-out of Richard Lee’s solo DBA variant rules (currently a work in progress). The two armies chosen were Vikings and Saxons (Anglo-Danish army list), with me running the Vikings and the NPG (non-player general) running the Saxons. The Saxons were defending, and the solo rules resulted in the following board layout, with a road (well, a dirt track really!) running down one edge of the battlefield, and a steep hill and wood making up the remaining terrain items (click on picture to upload a larger image):

The NPG camp was located as per Richard’s rules, and the NPG troop deployment determined on the same basis (Saxons are off in the distance in this picture!): 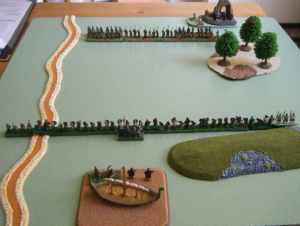 Note that the Saxons were bunched up towards the centre of the board, with their Spears protecting either flank and their Blades (including the General) in the middle of the line. The far left of the Saxon line opposite the wood was protected by their sole unit of Psiloi. I set out my Vikings in a long line, with Bows on my far right to counter the Psiloi. The battle lines arrayed (Saxons on the left):

The Saxon General’s stance was diced for, and he came up as a “defensive” commander. The NPG therefore advanced cautiously, sending his Psiloi into the woods and focusing on maintaining the cohesion of his line. As I moved forward the NPG pulled his Psiloi back a little and reinforced it with Spear supports:

Almost inevitably, the game came down to a clash of shield-walls, a hard slog which saw the NPG pushed gradually backwards as he attempted to maintain the cohesion of his line at all costs. I tried to over-ride the NPG’s default behaviour on two occasions to push the Saxons into a slightly more aggressive move, as allowed for in the rules variant – this came off the first time but failed on the second occasion. Consequently, Vikings and Saxons in the woods faced off against each other but didn’t move into contact: 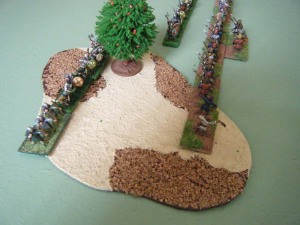 Gradually the Vikings weakened the Saxon line, where first one Spear element then another was lost on the NPG’s right as the overlapping unit of Viking Blades swung round to flank the Saxons. Finally the Saxon right collapsed altogether, leaving the Vikings in possession of the battlefield without loss to their own ranks: 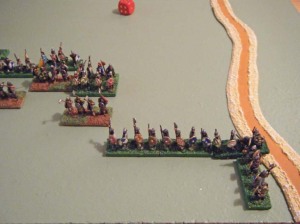 The defensive approach taken by the Saxons made their defeat almost inevitable, but I suspect that was a result of my uninspired interpretation of the NPG’s options rather than any flaw in Richard’s rules. The board set-up and deployment worked well, and the NPG behaved in a manner that more or less fitted the period and the contending forces. Next time though I think I’ll try a tougher match-up and a more mobile opponent, to see how well the solo variant works in those conditions.