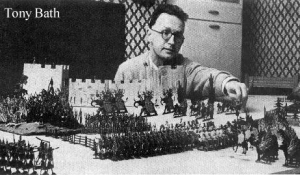 In his classic Setting Up A Wargames Campaign Tony Bath devoted a short section to Mini Campaigns. While the rest of the book focused on the minutiae of setting up a wargames campaign – map movement, weather, supply and replacement, and so on – Mini Campaigns described the various ways that Tony found for constructing much simpler affairs that served to introduce new players to the hobby or to fill the fallow periods of his famous Hyborean adventure. This is how Tony put it:

“In all the preceding chapters we have discussed ways and means of running relatively complicated campaigns which involve a good deal of paperwork and much calculation of movement rates, all of which tends to take up time. There are, however, other ways in which battles can be linked together so that their results will influence future actions; these are suitable both for those who wish to start off campaigning in a simple fashion and for those who do not wish to devote excess time to map movement and prefer getting on with the actual battles.”

Many solo wargamers take advantage of the freedom their version of the hobby gives them by devoting much time and effort to the development of complex campaigns. For some this is actually one of the prime motivations for going solo – it’s possible to drill down into the finer details of a period and a related campaign without having to worry what your fellow wargamers think. I can certainly see the appeal of that approach, and one day I’ll probably give it a try. But in recent months I’ve felt the itch to put together a ‘quick and dirty’ way of linking my battles together that I can run as a solo affair. Initially I thought about using the DBA campaign system, and did some preliminary planning with that in mind. But work and other commitments became so obtrusive that I wanted something simple enough to scrawl on the back of a piece of scrap paper, without having to worry about moving pins on a map or keeping track of what each ‘virtual’ opponent was doing; yet something that was nonetheless able to give some broader context to the solo battles that I was still (just about!) managing to fit in.

Tony Bath described his simpler efforts as mini campaigns, in which case I would probably have to describe mine as a micro campaign. The requirements were simple: find a way to string battles together that avoided complex book-keeping, maps and map movement, issues of supply and communication, and so on. Something  simple enough to pick up and continue at the end of a long and frustrating day…

There is a plethora of workable solutions to the question of how to set up something resembling a campaign whilst avoiding all the attendant complexity, and my recent effort is just one possible response. It’s a very simple framework that I plan to develop over the coming months, as trial and error help me to determine what works and what doesn’t. The basic mechanism however seems pretty sound, and – most important of all – playing it out has been a lot of fun so far. I’ll write up the details in my next post in case anyone feels like trying something similar.

Note: The photo of Tony Bath at the top of this post is taken from this tribute web page.

View all posts by Jay

2 thoughts on “Micro Campaigning – Part I”